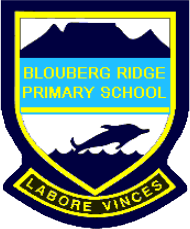 Name:
The School derives its name from the ridge that runs parallel to the Blouberg Coastline at the base of which it is situated.

Status:
The School is a State-Aided school under the jurisdiction of the Western Cape Education Department

History:
The School opened its doors to Grades 1-3 in January 1990. In January 1991, Grades 4-7 were added. The School has seen sustained and substantial growth since then.

Campus:
The School is situated in Wessels Road, Bloubergrant. The campus consists of buildings owned by the state as well as a few privately owned buildings which the school rents from the Blouberg Ridge Primary Trust.

The badge, motto and school colours:
The Badge features Table Mountain and the Sea, characterising the world-famous view across the bay from Blouberg. “Labore Vinces” means “By Toil (work, effort) We Overcome (succeed)”. Navy Blue, Light Blue and Yellow make up the colours of the badge.